By Cobra,
June 25 in General Football and Sport 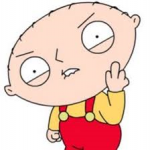 And the tv news channels are full of it, like there's nothing else happening in the world. Had to turn the sound down, the sound of high pitched, whiney voices was doing my head in.  No person sh